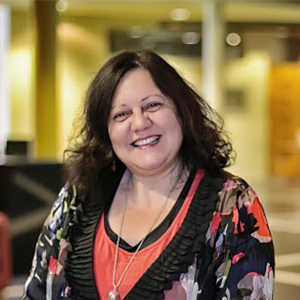 Honorary Lifetime membership is awarded to any person deemed to have made a significant contribution to the Association.  If anyone deserves this award, Tina does.  She is the 6th recipient of this award in the history of the association

She is a wonderful kind and caring person, with a strong desire to learn new things and share these with others, supporting them in their learning.

I first met Tina in 1999 when she joined the CEGSA (now EdTechSA) committee.  Her interest and enthusiasm was immediately obvious.

Her curiosity and desire to learn about and share new things is shown by:

She has the most amazing network of contacts both in Australia and internationally and the way her incredible network of contacts are delighted to support our organisation through either online or face to face masterclasses, conference presentations and workshops is a sign of the esteem in which she, and EdTechSA are held.

Most of all she is a very caring person.  She regards us all as part of the EdTechSA family, and treats everyone with kindness and respect.

It’s hard to be in a professional organisation these days.  There are all sorts of formal requirements and she has attempted to get all our procedures and guidelines formally documented.  No mean task when you are working with a group of teachers who during work hours are used to running their own shows.

Thank you Tina we love you!

Sue Urban has a long- standing relationship with the Computers in Education Group of South Australia (CEGSA), which is now known as EdTechSA, that started when she first joined the association in 1987! Sue connected with CEGSA because Information Technology has always been a passion and integral to her teaching throughout her career. This is evident through her work integrating technology into instructional programs that engage and motivate students, plus her ability to collaborate and encourage staff in using technology as a tool for effective teaching and learning.

Sue has had a varied career, starting as a classroom teacher for 14 years, then moving into leadership roles such as Information Technology Coordinator at Saint Joseph’s Primary School Hectorville. Sue was also President of the Gifted and Talented Children’s Association from 1999 to 2003 and in that leadership role, Sue led the hosting of the World Conference in Gifted Education in 2003.

Sue has always had an innovative approach to all that she does. In 2008, she established the ‘Coffee and Tim Tams’ after school gathering of staff keen to develop their skills on a particular need or something that Sue had decided to share. There is a wiki, called ‘Coffee and Time Tams’ of course, where shared resources are still stored and are accessible online.

Sue’s leadership and commitment to educational technology has been recognised by:

Sue joined the CEGSA committee in 2001 and has been a dedicated member, providing strong support and leadership in diverse roles that have included, Vice President, Treasurer, Publicity Officer, Conference Organiser, Awards Committee Convenor and Professional Development provider. Sue had a break from the committee a few years ago when she worked as an educational consultant for a company but returned to the fold when she resumed teaching at her current school.

Sue Urban is a most worthy recipient of Life Membership for her outstanding service to EdTechSA.

David first joined the CEGSA committee (as it was known then) in 1995, when he was working at the Special Education Resource Unit (SERU). 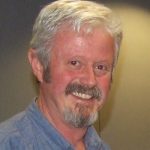 In the 18 years that David has dedicated to the committee, he has contributed to the organisation of many state and national conferences. In his final role for EdTechSA, he has been instrumental as our association representative on the Council of Education Associations. We are particularly grateful for the work he has done on securing grants for professional learning activities for members and facilitating joint events with other associations. David’s dedication has been demonstrated by his ability to attend management meetings even when he has other family and professional commitments.

He may not have been around long enough to “see the trams come and go and come back again” as the bank ad says … but he certainly has seen the national conference come around to Adelaide twice (1998, 2004) and almost a third time at the end of this year (2014).

Given David’s outstanding dedication to the CEGSA and EdTechSA committees over the past 18 years, I would like to propose that the members here tonight support a vote to induct him as a life member into our Hall of Fame.

Founding member of CEGSA since 1986

Anne Ballard has been an active volunteer within professional associations for educational technology for nearly 30 years. She started as a member of the Computing Studies Teachers Association in 1984 until its amalgamation with the Computers in Education Group of South Australia (CEGSA). Anne was part of the group that founded CEGSA in 1986. In 1992 Anne was elected president of CEGSA and held that position until 1995. She was also an Australian Council for Computers in Education (ACCE) Board member from 1992 to 1995 and held the position of ACCE Secretary from 1995 to 1996.

Since 2006, and Anne’s official ‘retirement’, she has coordinated the SiMERR project in SA and NT. This has involved supporting teachers to meet, develop resources and attend professional development activities. It is obvious that Anne has always given back to the education community through her dedicated volunteering and continues to do so in her highly efficient way.

Anne’s teaching career has been driven by her passion and expertise in Information Technology. She taught as a Junior Primary/Primary teacher from 1973 – 1981 and then started her exciting journey into advisory, leadership and mentoring roles. Anne believed firmly in supporting and mentoring teachers who were early adopters and willing to use technology to support their teaching.

During her time at Annesley, Anne planned for the introduction of notebook computers for all students entering year 7, including teacher support, program support and infrastructure support. This was not a small job! Anne was also a Moderator for the Senior Secondary Assessment Board of South Australia (SSABSA) from 1995 to 1997 and continued her work there as the Curriculum and Assessment officer for Technology from 1998 to 2005.

Anne Ballard is an amazing educator who, even in retirement, is extremely hard working and dedicated to all facets of educational technology. Anne was seconded as a Primary Mathematics Advisory Teacher in 1981 and shortly after that her career in Information Technology was launched. Anne was a teacher ahead of her time, as she set up an inaugural contact group for the small number of teachers interested in using technology to support their teaching in the primary years. From little things big things grow and Anne made the most of this by moving into other leadership roles, first as R-7 Computers in Education Advisory Teacher then Computing Senior at Annesley college. Anne then moved to SSABSA as Curriculum and Assessment Officer for Technology. This has helped immensely with CEGSA’s service to our members, as Anne continues in this role.

It is obvious by all of the highlights mentioned here, and more that weren’t added, that Anne is a dynamo and is extremely passionate about IT, ICT and Educational Technology. CEGSA has been extremely fortunate to have the excellent years of service and dedication from Anne. Even through difficult and challenging times, we continue to enjoy Anne’s dedication on the current Management Committee. Through all of her achievements, Anne is the doyenne of ICT in Australia and is an extremely worthy recipient of CEGSA Life Membership.

26 Years of Service to CEGSA!

Ralph has over 30 years experience in the application of Information and Communications Technology (ICT) in a variety of settings. His work, predominantly within education and government, has involved both the formation of policy advice and strategies for the use of ICT services and the design, development and management of pioneering systems.

Ralph’s early work for ICT in education included a substantial period from 1979 – 1994 at the Angle Park Computing Centre in South Australia supporting the use of computers in South Australian schools with a major contribution to the development of Satchel Software products and the Nexus online service in the 1980’s. In the mid 1990’s he was a senior manager at the Open Learning Technology Corporation, the organisation that later became Education AU. In the late 90’s and early this century Ralph was an independent consultant working on projects across many states and often supporting major projects of the Australian Council for Computers in Education.

These activities have demonstrated a high level of competence, not only in the applications of technology but also in the processes associated with the development of policy, strategies and related project management. Much of his work has involved management of the design, development and ongoing operational phases of pioneering systems and the promotion of their use through professional development programs.

Ralph is recognised as an elder statesman of ICT in Australia and is truly a worthy recipient of CEGSA Life Membership.